Saying Russian in Russian depends on the context, as there are multiple ways to do it.

If you want to say, for example, Russian language, you need to use the adjective ру́сский:

Ру́сский in this case is masculine, as well as the noun which it describes (язы́к). Let look at how it will look in feminine and neuter genders:

In plural, it will be:

Keep in mind, that Russian adjectives also change in cases. It means their endings can change depending on which role the noun, that the adjective describes, plays in the sentence. You can find more information about it here: declension of Russian adjectives.

Another sentence where you would want to say Russian would be, for example, I speak Russian.

In this case, you need to use the adverb по-ру́сски which literally means in Russian:

Here are more sentences of this type:

The difference between the adjective (ру́сский) and and adverb (по-ру́сски) is that the adjective describes a noun or a pronoun, and the adverb describes a verb. Following this principal and the rules of Russian adjectival declension, you can be always sure that you are able to pick the right way to say Russian in Russian.

If you get confused in the grammatical explanations, we invite you to study Russian grammar online on another of our websites.

Listen to "Russian" in Russian 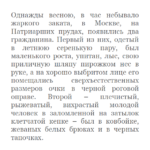 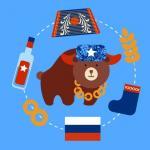 Examples of "Russian" in Russian