Word of the Day
Lesson of the day
Words by categories
Flashcards
Verb conjugation
Declension of nouns
Declension of numbers
Blog
Calendar
News and updates
Subscribe
Useful links
Search
Suggest a feature
Report an error
Support us
Create account
Login
Aug 28, 2021 | How to say it in Russian?

There are multiple ways of saying let’s go in Russian. It all depends on the situation (formal or informal) and what you mean by “go” – go by foot or in a vehicle, just strolling or rushing up.

For example, if your friend has stopped staring at a shop windows and you want to make her or him move, you can say:

Пошли́ is the plural form of the Past tense of the perfective verb пойти́ (to go, мы пошли́ – we went). It is probably the most popular way to say let’s go in informal situation.

By the way, using the Past tense of perfective verbs as a command is not uncommon in Russian. For example, a mom can say to her child: Встал и пошёл убра́лся в ко́мнате! (Stood up and went to clean up your room!). Or another common example is from the army: Упа́л, отжа́лся! (lit.: Fell down, made push ups!).

Пойдём comes from the same verb пойти́, it’s the Future tense for the 1st person in plural: мы пойдём (lit.: we will go).

If you are addressing a number of people or speaking in formal tone, you should add -те at the end:

– Пойдёмте!
[paî-dyóm-tye]
Let’s go! (talking to a few people or in formal tone)

It is not always you can use imperfective verbs to make a call for action, but in this case, you can:

– Идёмте.
[ee-dyóm-tye]
talking to a few people or in formal tone

Both forms above come from the imperfective counterpart of the verb пойти́: идти́ (to go by foot).

So far, all the verbs we mentioned imply walking by foot. If you go by car, you should use the perfective verb пое́хать (to go by vehicle):

By the way, when Yuri Gagarin was about to start his first flight to space, he said exactly that: Пое́хали!

If you want impress your friends by sounding like a native speaker, you can say:

Тро́гай is the Imperative of the verb тро́гать (to touch). It comes from the time when people used horses for going around and you had to touch the horse with a whip to start moving. Тро́гай was usually said to a coachman by passengers in the carriage when they were ready to start their trip. Obviously, saying тро́гай is appropriate when it’s not you who is driving.

Regardless of how you plan to go (by foot or by car), when you need to hurry up, you can use verbs that are not necessarily translated as to go, but rather mean moving fast:

Погна́ли comes from the verb погна́ть (to start speeding up).

This last one comes from the verb полете́ть (to fly). Despite the obvious fact that you are not going to fly, you can use it when you are late, for example:

And this is it for this lesson. Now you know a few ways to say let’s go in Russian.

If you want to catch up with the grammar mentioned above, here are some useful links:

To practice the conjugation of the verbs mentioned in this lesson, use these links:

Listen to "Let’s go!" in Russian

The audio recording includes all the examples (in bold and blue) listed above. 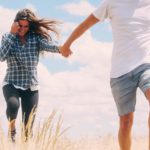 пойти́ [paîtée] Verb , perfective
to go; to begin, to resort to 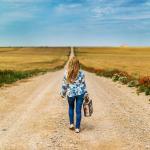 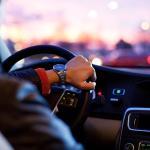 е́хать [yéhat'] Verb , imperfective
to drive, to ride, to go (by vehicle)

SUPPORT US SO WE CAN DO MORE!

We believe in the world where people are freely sharing knowledge and skills and everybody is dedicated to make the world around us better on a daily basis. We are bringing this vision of the world one little step closer by keeping all the websites of our network completely free and striving to make them as educative and fun as possible.
But living in our current world, we have to adapt to it. It means that we, as everybody else, need funds to survive and continue our work.
If you like what we do, if you like our vision, and if you can afford to spend a little amount of money today, please support us. You can do it by making a single or monthly donation or buying one of the offline packages. Every contribution is much appreciated.
Thank you and may you have success in all your endeavours!