Czar is the main title of the Russian monarchs (when the monarchy existed in Russia). Sometimes it is written in English as tsar or tzar.

In Russian, it is written царь.

Starting from the czar Peter the Great, Russia became an empire and czars started to be called emperors. However, the term czar stayed and continued to be commonly used.

The main Russian royal dynasty is Romanovs which first came to power in 1596. Although Romanov’s direct bloodline was interrupted in 1762, when Empress Elizabeth, having no children, appointed her sister’s son as her successor. After the death of Elizabeth he became the Russian Emperor Peter III. He came from the bloodline Holstein-Gottorp-Romanovs. His descendants in Russia were still called the Romanov dynasty.

The last czar of Russia was Nicholas II. After the Revolution of 1917, Nicholas, his wife and their five children were brutally killed by the Bolsheviks. Their remains were only found in 1991. After several years of expertise, a special commission concluded that the remains indeed belong to the last Russian czar Nicholas II and his family.

Listen to the word "czar" in Russian 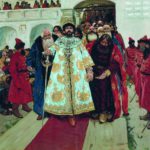